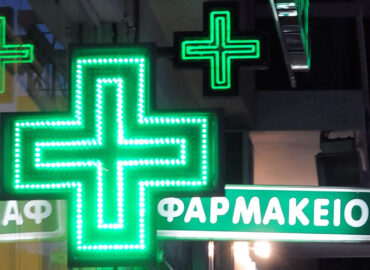 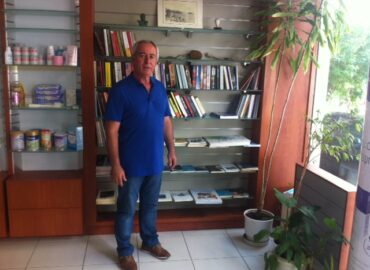 Christos Kavvadas has been a pharmacist for 37 years. He maintains a pharmacy on Pylou Street in Kolonos, a -especially on hot summer days- very quiet neighborhood of Athens.

Mr. Kavvadas decided to create a separate lending library inside his pharmacy, which is partly visible from the shop window, but is revealed in a rather impressive way to the visitor or passer-by when he crosses the pharmacy threshold. Right next to a showcase with powders, herbal drinks, hypoallergenic, tar soaps and various cosmetics, one can now find Greek and English language books, novels, humorous readings, and even literary magazines. All this in a library with six large shelves, which the 63-year-old pharmacist has begun to fill both with his own books and with the contribution of friends and acquaintances.

But how did this initiative come about and how was it implemented? “ I started a conversation a few months ago with some clients, with whom we had common interests, in order to exchange books: to suggest to each other the books we like”, he tells ATHENS 9.84. “ When I started to put books often in my bag to bring to the pharmacy to read during the hours I spend here, I thought of creating a lending library in order to find and other people to have a conversation beyond medicines. The response is already visible, as we have borrowed the first five books in a week “.

Mr. Kavvadas made the beginning, which seems to find would-be imitators: it makes me very happy. They call me to congratulate me and ask if I need more books to send me even people I have had time to talk to. “

For him, “the pharmacy has always been a place of exchange of views, since the last century, some of which were hangouts of intellectuals. For example, in Lefkada where I grew up, the city’s pharmacies were frequented by lawyers and high school teachers instead of going to cafes, creating a cultural space. With this in mind, it would be good to get away from shoes and cosmetics and give a basis to culture. I would be happy if people came to my pharmacy for books, but the project has not yet become so well known. It’s only been ten days, I’ve talked to 4-5 people about it and so many more have seen the library. Many ask me what the inscription “Noos yama” I have put and I answer that we can heal the body with drugs and the mind with books. Starting with a better mind, we will definitely have a better body. So I would like the whole side of the pharmacy to be emptied of cosmetics so that more books can be put in. The place where the pharmacy is located has low commerciality and those who enter are not because they happened to pass through the area, but because they are looking for a specific medicine “.

How many and what kind of books does the pharmacy library have? “Currently, around 200. From Lena Manta, brought by a client who works in a publishing house, to more specialized books on genetics and the history of pharmacies, which few are interested in. Also, several novels by Greek and foreign authors, biographies, poetry, a few police and scientific. When more than one category is gathered, I will put them in order more easily. I am thinking of putting a paper with the suggested ones, as in bookstores, so that everyone can choose according to their interests. I have not organized yet. So far, I’re writing the first five books borrowed on a piece of paper. Later, I can follow the way lending libraries work and create a database with all the books and people who borrow them. It is quite early and the process will be better organized after the summer “.

However, the start was very encouraging, according to Mr. Kavvadas. This is because “ I also see the young people reading and rejoicing that they find something like this in their area. Most customers, suffering from their pain, just take their medication and leave. Whenever I see that they are not in a hurry, I stop them and give them an update on the library. Anyone can keep the book for as long as they want, even if they do not return it. The beauty of a book, after all, is not to beautify a wall, but to circulate and be read by the world as much as possible “.

The occasion to start a close relationship with the book about Mr. Kavvadas was extremely unpleasant: an accident he had 20 years ago with the motorcycle he was riding, forced him to spend an entire summer with crutches in a chair. So began reading. Lately, who -as he admits- has a lot of free time, he reads 4-5 hours a day, while he borrows books from his friends and from libraries.

My joy is to pass on knowledge through the book because it is a way to give wealth through knowledge to the other without impoverishing you. A good book may be an incentive for some people to start or continue reading. That accident changed me as a person, something that happens to everyone when they read a book. I had a good relationship with reading until then, but I was not a fanatical reader. I read one book a month, and now one or two a week. In the phase I am in now, reading and traveling are what keep me going and I can say that I am happy “.